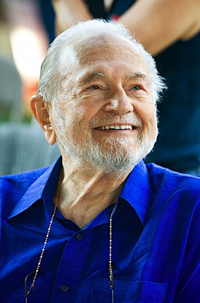 Swami Kriyananda was the founder of Ananda Sangha and a direct disciple of Paramhansa Yogananda. Having met Yogananda at the age of 22, he dedicated his life from that point onward to the spreading of his Guru’s message of God-Realization.

For that pourpose he founded the first Ananda Community in 1969 near Nevada City, California. In the decades that followed he started eight communities, wrote more than 150 books, composed 400 pieces of music, and gave thousands of lectures, helping millions of people around the world find happiness, peace of mind, and joy.

After a remarkable and inspiring life, Swami Kriyananda passed away on April 21st, 2013, in the Ananda community he founded near Assisi. Thousands of studends gathered there to celebrate his life in deep appreciation and gratitude. His legacy is one of Divine friendship and a sublime example of dedication to God, and his work continues to flourish in several communities around the world.

The Legacy of Swami Kriyananda