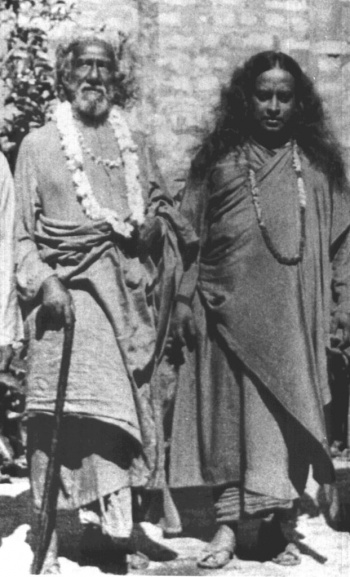 The guru of Paramhansa Yogananda, Sri Yukteswar lived his life in India and belonged to the ancient Swami Order of monastics. He initiated his disciple Yogananda into the same order, directing the young swami to share the message of Kriya yoga throughout the West and later bestowed upon him the spiritual title ‘Paramhansa’ (“supreme swan“). Yukteswar was the polestar of Yogananda’s spiritual life and when reading the Autobiography the deep admiration, affection and reverence Yogananda felt for his guru is strikingly clear.

In his earlier adult life Sri Yukteswar was married and had a daughter, but following his wife’s passing he became a swami, dedicating his life to achieving liberation and training the chelas who were called to his ashram. Yogananda called him a ‘gyanavatar’, which means ‘incarnation of wisdom’.

This quality is the hallmark of Sri Yukteswar’s teachings and writings; he is famous for his calm and unruffled discernment. His direct and seemingly ‘severe’ manner is underpinned by a deep love for his chelas and a complete realisation of the divine. Sri Yukteswar, in turn, was a disciple of Lahiri Mahasaya.