Many years ago, in the early years of Ananda Europe, Swami Kriyananda gave a Kriya initiation in the house of a devotee in London. A seed was then planted that fully sprouted only recently, when a second initiation took place.
The place was a retreat center in the countryside near Oxford, run by Carmelites. Saint Theresa of Avila, the founder of this order, continues to be an inspiration for many Kriya yogis. A beautiful picture of her ecstatic life adorned the entrance hall. And the conference room, of course, had been beautifully transformed into a temple, with the main focus on an altar, that was sanctified by pictures of the Masters of Kriya yoga.
The whole retreat was an inspiring example of teamwork, coordinated by Nalini, whose unwavering dedication and service were confirmed last summer, when she was ordained minister by Jyotish and Devi.

The Sangha on the British isles is called “Ananda UK and Ireland.” Eire was represented by Sananda, another Ananda minister who flew over from Dublin to serve.
Both these ministers lived for many years at Ananda Assisi. Their attunement and insight  into the subtle aspects of community building (“community” here being used in the subtle sense of a type of cooperation that supports the spiritual unfoldment of the individuals involved), have empowered them to start and support an Ananda work in their own country.
Master’s ray of light was available from the very beginning of the retreat and all we, participants, had to do was enter that ray and allow it to bring out our deeper, soul nature. 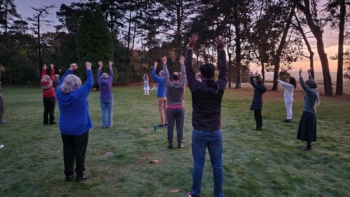 There were many highlights, the initiation itself being the most powerful one.
Ten new kriyabans were born. Others had practiced the sacred science and art for many years, still others had received initiation recently online and now wanted the “in-person” experience. 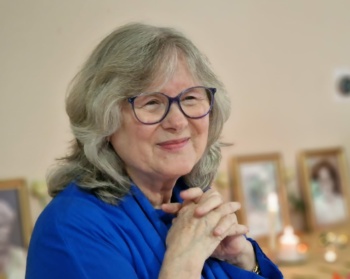 The next day Uma shared many stories about her long life as an Ananda pioneer and about the life of Saint Theresa. The Festival of Light was then celebrated, with attunement and depth, by Nalini and Sananda.
It’s been an honor and a deep joy to serve as a Kriyacharya on this historic occasion, and to do so with Nayaswami Uma, who returned to her country of birth, for the first time to give Kriya initiation: no doubt the beginning of a wonderful expansion.