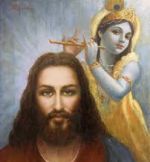 “I picture Him in my mind as He really was—Oriental Christ. Many painters have tried to give Him blue eyes and light hair, but He was a pure Oriental…by birth and blood and training. The Wise Men of the East, or East India, came to confer about Him when He was born, knowing Him to be one of the greatest message-bearers of Truth.”

“(The) great Message of Jesus Christ is living and thriving in both East and West. The West has been perfecting the physical man, and the East has been developing the spiritual man. Both East and West are one-sided. And is it not strange to note that, perhaps due to God’s secret Plan—since the East needs material development, it has been invaded by Western material civilization! And since the West needs spiritual balance, it has been silently but surely invaded by Hindu philosophy!” — Paramhansa Yogananda, Oriental Christ 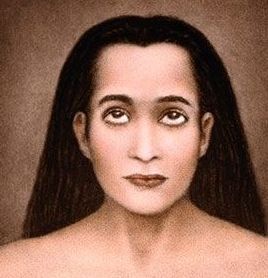 “The northern Himalayan crags near Badrinarayan are still blessed by the living presence of Babaji, guru of Lahiri Mahasaya. The secluded master has retained his physical form for centuries, perhaps for millennia…Babaji’s mission in India has been to assist prophets in carrying out their special dispensations. He thus qualifies for the scriptural classification of Mahavatar (Great Avatar)…

The Mahavatar is in constant communion with Christ; together they send out vibrations of redemption, and have planned the spiritual technique of salvation for this age. The work of these two fully-illumined masters–one with the body, and one without it–is to inspire the nations to forsake suicidal wars, race hatreds, religious sectarianism, and the boomerang-evils of materialism. Babaji is well aware of the trend of modern times, especially of the influence and complexities of Western civilization, and realizes the necessity of spreading the self-liberations of yoga equally in the West and in the East.” — Paramhansa Yogananda, Autobiography of a Yogi, Original Edition, 1946 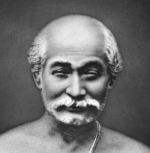 “Lahiri Mahasaya, my Master’s Master, was an ideal prophet and a Christ-like man, although married and performing the duties of ordinary life. We can picture saints in the forests; but when we find them in the jungles of civilization, we can hold hopes of spiritual salvation for the worldly man. It was Lahiri Mahasaya who revived the Yoga system in India, and he was the harbinger of Yoga in Bengal. He was a prophet of the world, but was not of this world. He had miraculous powers. His life-teachings of Yoga, namely, to be calmly active and actively calm, are suitable for the use of the spiritually aspiring business man as well as for those in every station of life who are seeking greater spiritual realization.” — Paramhansa Yogananda, East-West magazine, 1928 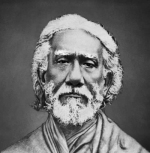 “Thou light of my life—thou camest to spread wisdom’s glow over the path of my soul. Centuries of darkness dissolved before the shafts of thy luminous help. As a naughty baby, I cried for my Mother Divine, and She came to me as my Guru—Swami Sri Yukteswar. At that meeting, O my Guru, a spark flew from thee, and the faggots of my God-cravings, gathered through incarnations, smoldered and blazed into bliss. All my questions have been answered through thy flaming, golden touch. Eternal, ever-present satisfaction has come to me through thy glory…

Our souls met after years of waiting. They trembled with an omnipresent thrill. We met here, because we had met before.

Together we will fly to His shores, and then we will smash our planes of finitude forever and vanish into our infinite life. 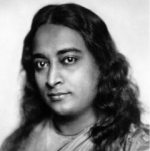 “Mukunda Lal Ghosh, later known to the world as Paramhansa Yogananda, was the son of a senior executive in the Bengal-Nagpur Railway; as such, he faced the prospect of wealth and high worldly position when he grew up. But it was not this world that attracted him. From earliest childhood he had longed for God as intensely as others long for human love, or for worldly recognition.

“Soon after graduation from high school, Mukunda met his guru, the great Swami Sri Yukteswar of Serampore, Bengal. At the feet of this great master he attained, in the amazingly short space of six months, the high state of samadhi, or unconditioned oneness with God. His guru kept him in the ashram another nine and a half years, while he trained him for his mission of yoga dissemination in the West. ‘The West,’ Sri Yukteswar explained, ‘is high in material attainments, but lacking in spiritual understanding. It is God’s will that you play a role in teaching mankind the value of balancing the material with an inner, spiritual life.” — Swami Kriyananda, The New Path