One the most memorable times of living at Ananda Assisi was when the World Brotherhood Choir sang at the Vatican on Wednesday, March 8, 1989. After celebrating Paramhansa Yoganandaji’s Mahasamadhi on the previous day, community felt a deep blessing as we caravanned to Rome to share Master’s and Swami Kriyananda’s songs as a vibrational-offering for the Spiritual Unity of All Mankind.

It was an historical time for us at Ananda Assisi. We shared our teachings of the Original Christianity and the Original Yoga as taught by Christ and Krishna during an audience with Pope John Paul II!

Excitement was in the air that day! We arrived at the majestic St Peter’s Basilica in Rome. It seemed to welcome us with joyous anticipation and out-stretched arms. Almost the entire staff came from Ananda Assisi that day to attend this auspicious gathering with The Holy Father of the Roman Catholic Church.

All the devotees were buzzing with questions in their minds. Are we actually going to meet him, or will he be behind a plastic security enclosure? Can we talk to him and or shake his hands? Is there a chance for him to bless us? These questions were soon answered as we were directed by ushers into Pope’s Audience Hall. With the capacity for 10k people, the hall was  completely full as we of gathered for this weekly event.  Nine months before hand, we had written the Vatican and made reservations for this very special day, but how did the inspiration come to get us here?

Well, it came about as a Joy Singer group, five devotees from Ananda Assisi, of which I was a part, had performed an audition at the Basilica of St Francis.  A resident Franciscan Monk by the name of Father Testa was a long-time friend. As we brought hundreds of pilgrims from around the world to visit the sacred shrines of St Francis, Padre Testa knew us because he took us on tours of the Basilica. Regularly, Ananda Pilgrimages were an important income stream for our fledgling community and continues to be even today. 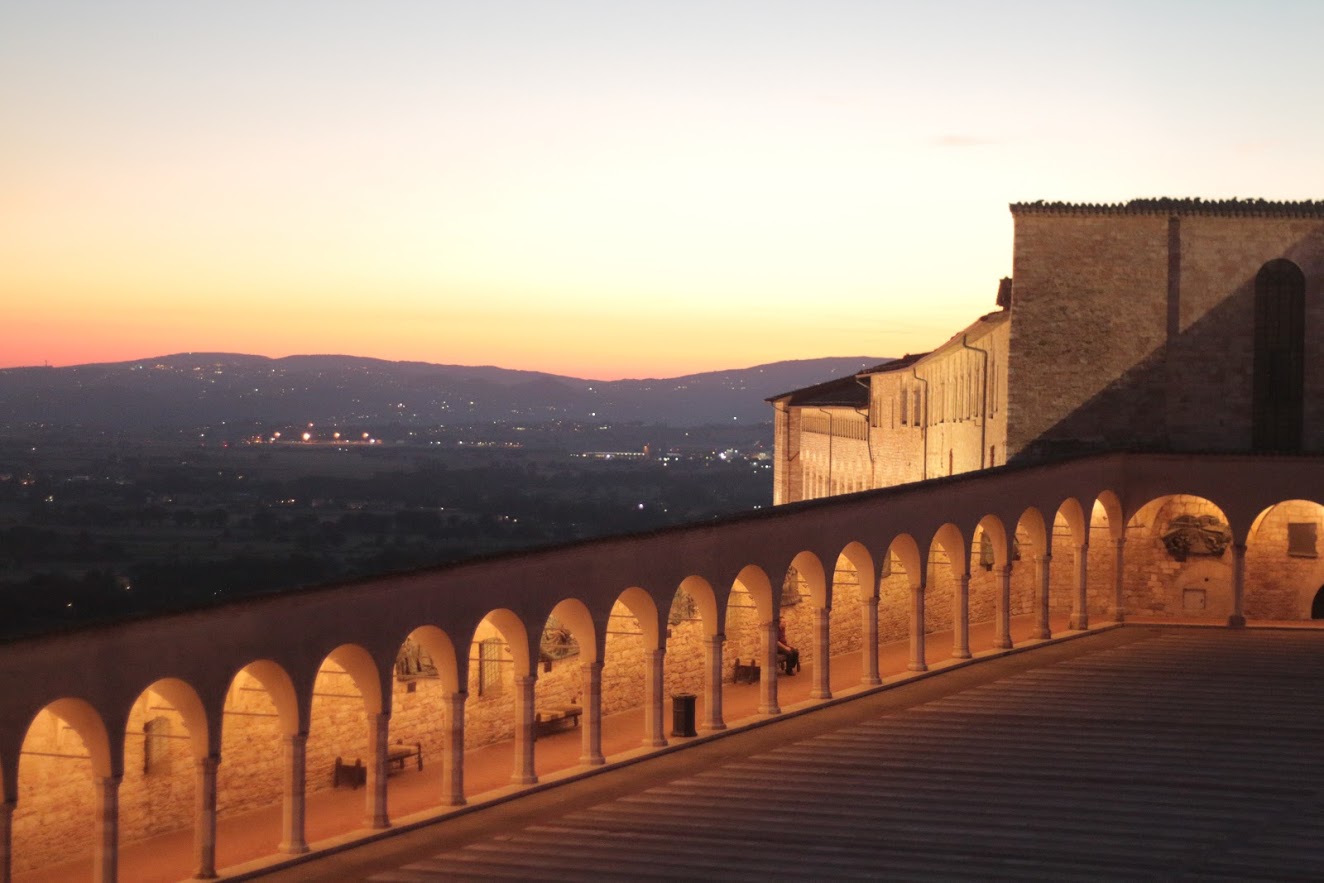 So, Padre Testa knew us well, but didn’t know our music and so we sang for him at St Francis’s Tomb. He went wild for JOY! His name reflected that -he was brought from his head, dalla sua testa, to his heart, al suo cuor!  The Spirit of Christ and of St Francis touched him so deeply that he exclaimed to us, “Your music is of God and you are welcome to sing here, or in the Upper Basilica anytime you choose!”  Father Testa further advised,”If you’d like your music to become known, go and sing for the Holy Father at the Vatican!”

Swamiji was at Ananda Village at the time as his house wasn’t built in Assisi yet. Swamiji was ready to fly over to be a part of this historical time, but we could not guarantee that he could have a heart to heart meeting with The Pope. Since we were uncertain whether he could actually sit down with Holy Father, Swamiji didn’t make the long trip, but sent an Ananda Choral Director over to help develop the Joy Singer group into a strong 17-voice Ananda World Brotherhood Choir.  This was the first time we started an actual choir at Ananda Assisi, starting in the Fall of 1988.

The Choral Director whipped us into great singing shape. Over the course of the next six months, before the audience with the Pope, our confidence level grew strong as everyone in the group was happy and joyful for this opportunity. It was a chance for to create a bridge between East and West – a tribute to Paramhansa Yoganandaji’s mission and teachings of Self-Realization. 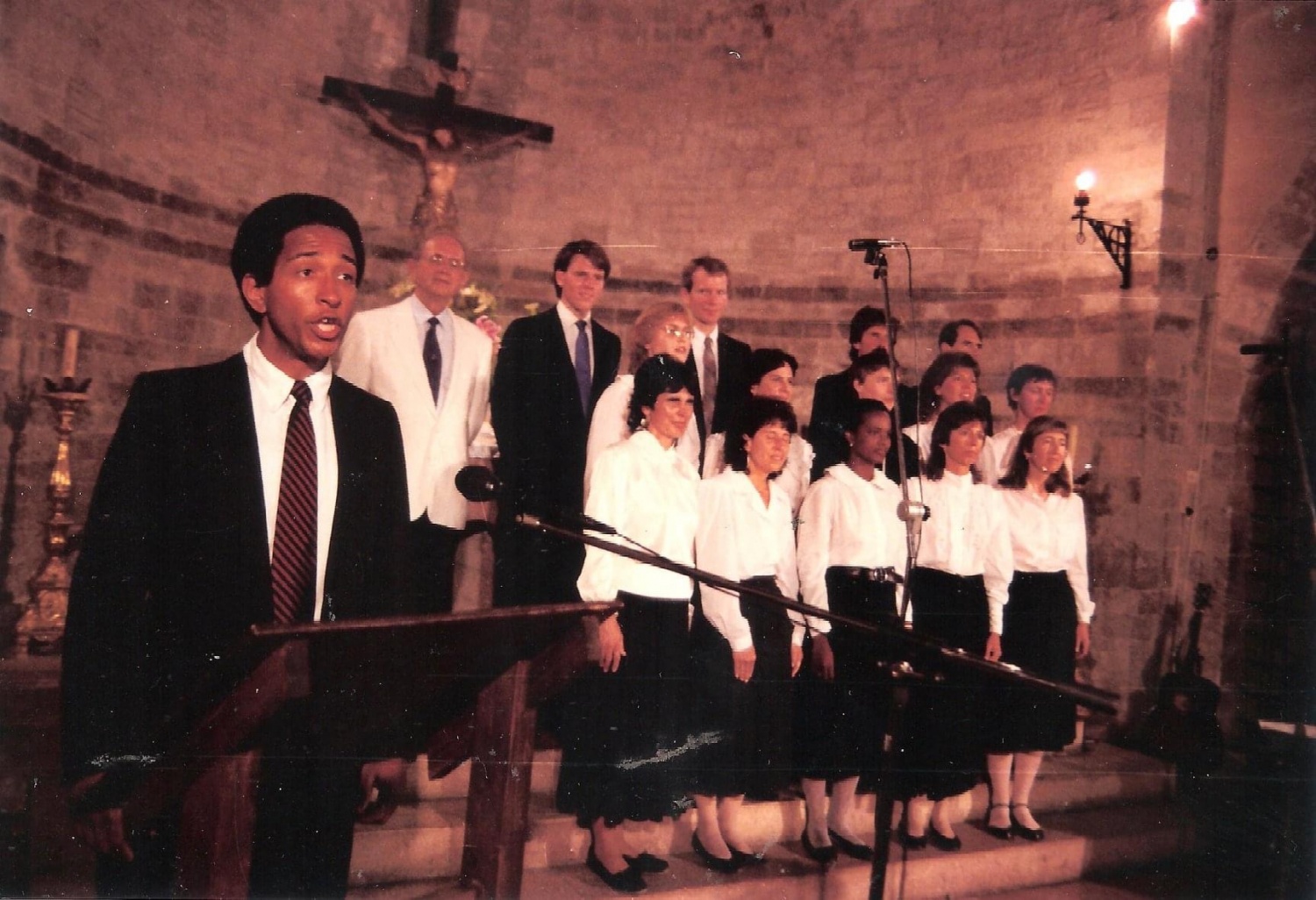 In fact, when Master visited Assisi and Rome in 1935, I wonder if he knew there would be a center founded in his name some day near the Italian town of St Francis. Master had spiritual visions of St Francis and called him his patron saint.

Master recounts in a letter to Rajarsi Janakananda that his entourage drove all night long, around Tuesday, July 22, 1935, with their new 1935 Ford Motor Car (which they had shipped with them on the boat from America to the United Kingdom and travelled around Europe with). Master writes to Rajarsi that they were having engine trouble and that they had to continuously fill the leaky engine with water from Venice to Assisi as they arrived in the early morning on July 23, 1935.

“As I was visiting his living tomb and put my head on the shrine steps, St Francis appeared to me. Then I saw a tunnel of Eternity in which he disappeared. The entire cellar beneath the church was replete with his vibrations.”

Swami Kriyanandaji was also told by Master, directly, of his experience as he walked on Mt  Subasio during that trip: “I walked the paths of St Francis’s hermitage, L’Eremo delle Cariere, and I had a vision of Christ and Francis walking hand and hand with me in great Joy.”

Personally, I think God and Guruji were setting the foundation stone for Ananda Assisi in The Ether in 1935. Twenty years later, Swamiji was the first SRF/YSS Kriyacharya to give initiation in Paramhansaji’s name in Florence, Italy in 1955. Master empowered Swamiji and the devotees of Ananda to eventually establish the physical presence of Ananda Assisi in May 1987. We purchased the first land at Il Rifugio Del Re, the 3 story hotel on 2 hectars  on the top of Monte Mezzo (the meeting point where  the towns of Assisi, Valfabbrica, Gualdo Tadino and Nocera Umbra come together. It is also where St Francis travelled on his last trip from Le Marche province onto Assisi to lay his body down in death.)

Back to our story! The first song we sang that glorious day was by Guruji: “Door of My Heart” in 4-part harmonies in Italian. It was a magnificent choice, because the power of that chant sung by a 17-voice choir literally captivated everyone’s attention. Immediately, people hushed their conversations and felt a wave of God’s Blessing swipe through the crowd. People began to intently listen to the only choir in attendance at this Papal Audience.

Then the miracle happened! The ten thousand people in attendance began to learn the words in Italian. As we repeated each phrase of the chant, the people began singing with the choir. It was one of the most powerful blessings of my life to witness this. Everyone was crying as we were uplifted into the spirit of the chant. No one expected that the presence of God as the Holy Spirit was directly empowered by a Hindu-Yogi’s chant and his attunement to Christ and the Master’s of India.  If we would have stood up and announced that this song is written by a Hindu, I don’t think anyone would have sung. 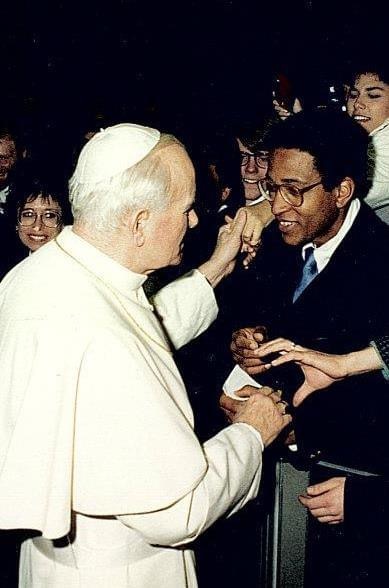 After the chant, the choir sat down and people applauded. The program then started with the devotional air set into motion by “Door of My Heart”. A reading from the Holy Bible was made and the Pope came out to give a sermon. It was very moving. Finally, the various groups from around the world were introduced to John Paul II. They would stand during their introduction. We were introduced as the World Brotherhood Choir from Nevada City, CA.

When they said our name, we stood up as a group dressed in formal black & white formal attire. With a powerful sound, we sang Swamiji song from The Christ Lives Oratorio, “Thy Light Within Us Shining”. The Pope went wild with JOY, just like Padre Testa at the Tomb of St Francis. As we finished the song, he was waving his arms and hands, blessing us at a distance. Once the audience was concluded with a prayer by Il Papa, he came down from his throne and as the Vicar of Christ in this world began to  connect with everyone in attendance.

We have a film of the entire occasion that I plan to put up on U-Tub very soon. Hopefully, we can share it with everyone in regards to the history of Ananda Assisi. The Pope is caught on film shaking hands and blessing everyone from our entourage. Pictures are attached here from that occasion. We gave him gifts of Swamiji’s books and letters from different people. I believe we gave a letter from Swamiji to The Pope.

It is also important to say that after this audience with the pope, the choir began to compete in choral competitions in which we occasionally won trophies. During one competition, for songs dedicated to the Virgin Mary, we sang from the Oratorio Christ Lives, Mother of Wisdom. Our 17 Voice World Brotherhood Choir won 2nd Place, but the first place choir came from Budapest, Hungary and had 60 Voices. Also, later we went on to win 1st Place in songs dedicated to World Peace with Swamiji’s song entitled,” Pace, or Peace”!

Spiritually minded people everywhere are very touched by our music. It should continue to be a ministry for outreach for all of Ananda throughout the world.  We’ve sang in Roman Catholic churches throughout Italy and Europe and it has always been a great way to share our teachings of Self-Realization with the world.

As Swamiji would often say, “If you would like to know who I am, get to know my music.” May the whole world come to know these songs some day and transform our Planet Earth into a harmonious and joyous family of human beings! Om Peace Amen 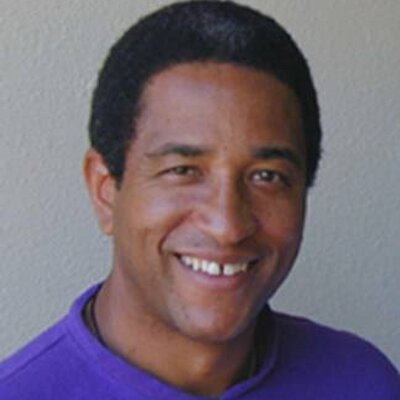 Tyagi Ram was the spiritual director of Ananda Assisi from 1988 to 1991. He has many stories and experiences in the early days of Ananda Europa, traveling with Swamiji and the World Brotherhood Choir. He presently lives in Los Angeles, The Benares of the West, is a Light- Bearer Minister at Ananda LA and helps with sales at Crystal Clarity Publishers www.crystalclarity.com for Swamiji’s and Master’s book distribution.