The emphasis throughout this second six-year phase of education should be on teaching through the feelings and the emotions, and particularly on developing the finer feelings. For it is during these years that a child can begin to direct his emotions constructively, instead of letting them rule him.
Swami Kriyananda in his book Education for Life 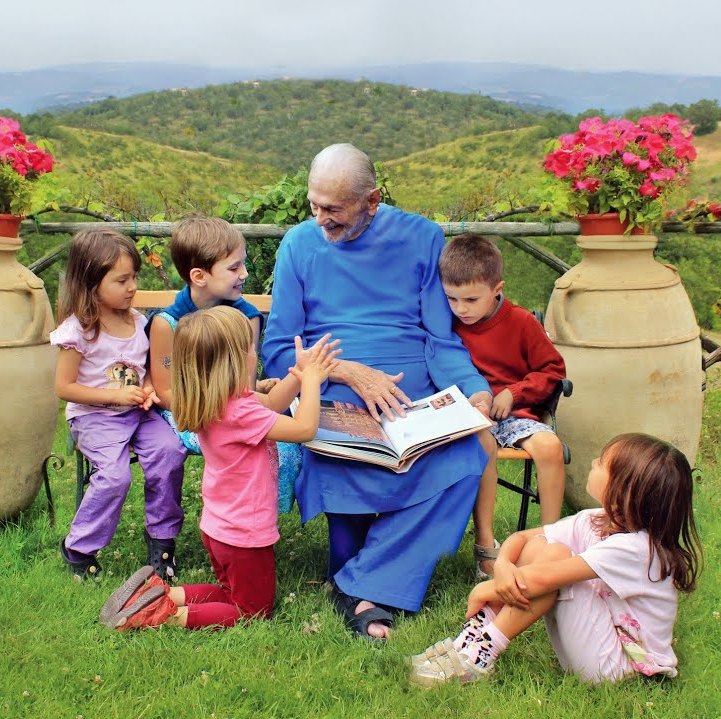 I had to learn quickly. Old style discipline like raising my voice didn’t help. In fact even the slightest inner emotional reaction to the disruptive energy she was putting out, made me feel terribly inadequate. So I sought counsel with my more experienced colleagues in America and read what they had written, as a result of many years of happy interaction with children.

I soon found this in my manual. It regarded firm and loving discipline, and building relationships with children:

Be on the lookout for spontaneous opportunities for one-on-one contact (walking together, the need for special help, etc.) while also planning structured times (during a quiet reading period for example).

Watch for early signs of negativity; intervene before things get out of hand.

Mary was open to spending regularly some time apart with me, just chatting or listening from my part: this wasn’t difficult, because she had a lot to give and, with all that, a good sense of humor. 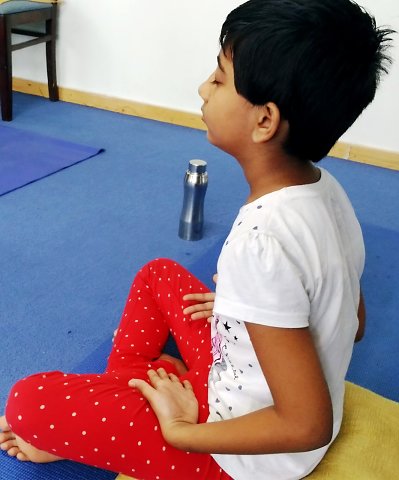 During our conversations I also frequently acknowledged her positive qualities. I discovered that in all this the color of my voice was more important than the words I could offer, for Mary’s tool of maturity was definitely her heart.

As I learned, over the weeks, to perceive in her the “early signs of negativity” (fast, heavy breathing, physical tension and rigidity), I was able to take her apart in time and do some breathing exercises with her. She was surprisingly open to this and followed me willingly as we performed the pranayama of triangular breathing.

In time Mary’s tantrums became much less frequent and she started to explore other, more functional ways of behaving.

Creating a Personal Connection to the Subjects

Another guideline I found for the feeling years was the following: during those years I needed to focus on gaining an informal introduction to the various arts and the romance of science.

Even at a very young age children tend to consider their various assignments as something that is imposed on them from outside. School is a place of unfamiliar, threatening discipline and that often means tension and emotional disconnection with what it is that is really trying to happen when they learn.

For the same reason many high school students dislike certain great works of literature when they have to study them at school, only to discover their beauty and value much later in life, when they feel that those stories and poems connect somehow with their own feelings and human experiences.

While I appreciated the earnestness with which my children did their math and geometry, I missed the inner connection that would show me a person whose feelings are fully absorbed in what is trying to happen. So I tried an experiment.

Those perfectly square wall tiles were a constant reminder of the kitchen that had previously been a part of our classroom. They were rather boring to look at, so we decided to make them beautiful, by covering  each tile with a geometric color composition of the same dimensions. 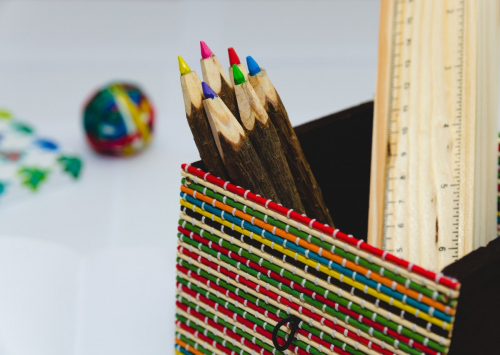 The assignment was simple: initially their only tools were ruler, compass and pencil. Colors would come at a later stage. They had to find the perfect center of the square and work from there. For the rest they were free to follow their inner guidance … to follow their feelings.

After the purely geometrical part was finished, they could proceed with their colored pencils.

Part of this three or four day project was that they would not write their names on their geometric art compositions. After they had finished they were just put into a box and shuffled. Then each child chose one at random and glued it on the wall tiles.

This anonymity made the beautification of the classroom a team effort, much like a symphony orchestra were the instruments cannot be heard individually but contribute to the beauty of the whole.

It was not to everyone’s liking. In fact one of the girls said:

“I’d rather take my work home with me … but maybe I tend to hold on to my things a little too much.”

And with a deep sigh she put her work into the box.

It became fun again once they had to guess who had been the artist of the various designs: a way for all of us to get to know each other. 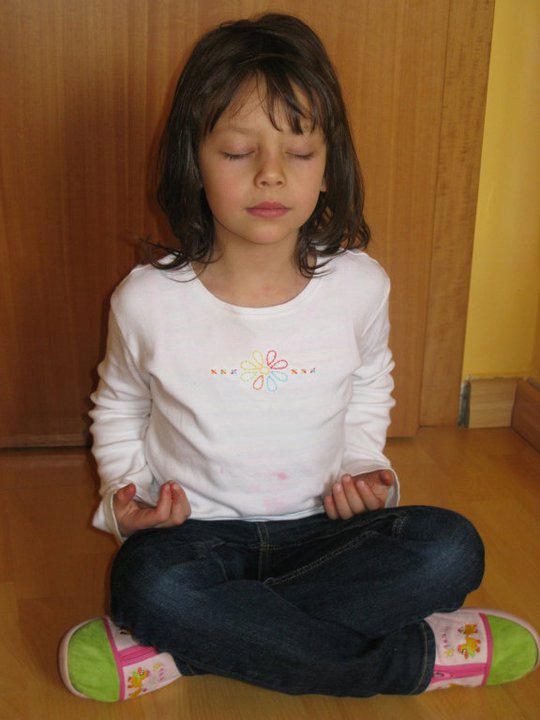 And then there was music, especially singing. Not a day went by without exploring the colors of our voice, without learning new melodies or singing old ones. Music especially created a beautiful flow in the school.

But my own most precious memory of those years with them was that five minute meditation we had once, at the end of a particularly harmonious day. I gave them a few instructions on posture and then we entered a deep silence.

Before they went home, I was able to say, honestly, that five minutes of meditation with them was worth more than a three hour meditation in our temple!

Darshan was a teacher and co-director at the Living Wisdom School Assisi, from 2008 until 2016.